Last week I had the opportunity to participate in an “Extreme Manufacturing” event at Lockheed.   The event was run by Joe Justice of WikiSpeed, and organized by Scrum Inc.  The plan was that by using agile methodologies, we would build a street legal car capable of getting 100 mpg in six half hour “sprints”.

Agile has been high on my radar recently.

At #BBCcon  a couple of weeks ago, I attended a number of sessions focused on moving organizations from “waterfall” development methodology to agile.   At Dreamforce, I attended another session on Agile.

But pretty much all I had seen in the Agile world was about software development.  This was different.   Extreme Manufacturing is all about bringing the techniques and methods of Agile to hardware and systems design.  In this event we were told to build a car over six sprints. 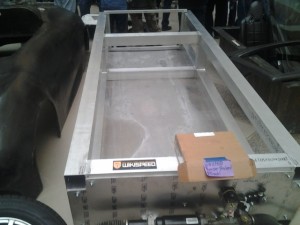 Here is the frame of the car 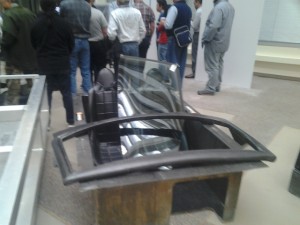 We started with groups of components including a frame, an engine 4 wheel assemblies, a body, a steering assembly, a windshield, and a few others.   There was Kanban board up and a “project manager” would write tasks on yellow sticky notes, and put them into categories of either ready or not ready.   Scrum teams of 3-5 would then choose one of the tasks from the ready column, move it into in progress and start working.  The organizers intentionally put some “mistakes” in so that the team(s) would need to work together to solve some problems.   Unfortunately there were some real mistakes in some of the components, most notably that one of the cross pieces on the frame was welded 4 inches too far back, that prevented the car from actually fully coming together.  We ended with something that looked a lot like a car and steered, but the engine wasn’t hooked to the wheels. 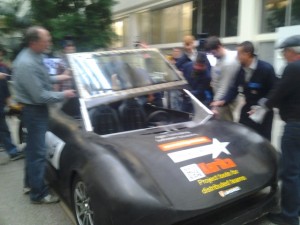 Putting the windshield on. This looks a lot like a car, has all the major components, and steers, but the engine isn’t connected to the wheels, so it doesn’t go

Does it work? The jury is still out.  Here is what I see.

This was an interesting, fun event.  Of course there are some real differences between a learning exercise and real world applications, but I thought that there were some great lessons.  Overall, I think that agile methodologies, applied properly to the right problems can indeed speed and improve hardware and software development.